Starting from the corner of Ivy Grove, as you turn right onto Derby Road notice the mile post against the shop wall. There is no way of knowing its age, but that type of sign can date back to the 17th century.

Having turned the corner, you can see on your left Heath Road. In 1695 the trustees of Miss Elizabeth Heath’s estate bought the land and farm that stood there. She was a Quaker who supported several charities, and when her trustees sold the premises to the Saxton family early in the 20th century and the new road was made, it was named after her.

In 1905 Mr. Thomas Mander moved from Slack Lane to open his new wheelwright’s workshop where the rear end of the present garage workshop now stands, his latter property being made into houses. He and his son later opened the garage to keep up with the times.

It is worth noting that when a pit was dug for new petrol tanks in 1959, water from an underground hot spring ran into the corner of it from Springfield House across the road. That spring water comes from alongside the house at the top (far) end of Ivy Grove. A cottage at the north side of the garage forecourt is dated 1829.

Back to the right side of the road, and you pass a large property that now accommodates a dental surgery and a vet: this is East View. It was once the home and surgery of  Dr.

Ashdown and then of Mr.Cecil Scott, a dentist. One of them obviously carried out the extension that forms the northern end of the house.

Springfield House next door, from 1965 to 2005 the Coop Insurance Office, was the home of Mr. F.H. Shardlow who owned the Ripley Lace Company (see below).

The footpath that runs between the two houses was a continuation of the lane that became Heath Road, and it ran westwards through fields. Turning right towards Slack Lane, it then skirted The Willows to join the path that is now that length of School Lane from Lime Avenue to Shirley Road.

The Ripley Leisure Centre, next but one down the road, began life as Ripley Pool, built to a great extent by public funds and effort. The first purpose built pool in the town since the Public Hall closed around 1904, it was opened in 1973, and was enlarged to include a full sports and leisure complex in 1978. It was rebuilt in 2006.

The Fire Station next but one to the centre, was erected in 1960, replacing an earlier one down Meadow Road. This new one was a well equipped full time station serving the whole of the district, until it was made a part time and administration unit in  1998, with Alfreton taking superiority.

Further down the road Cemetery Lane is on the left. A Burial Board was formed in 1857 and it was they who bought the plot of land to open a cemetery.

Just below Cemetery Lane there are some newer houses built in 2002-3 on the site of the Ripley Lace Company’s Outram Mill. In 1922 Mr. F.H. Shardlow bought and extended a closed preserves manufactury that, with an orchard behind it, stood on land that had been in the ownership of the Crossley family. Here he re-sited a mill factory from Outram Street where they made shoe and other laces; hence the name of their new premises. It is claimed that Mr. Shardlow had originally started tagging laces, an  innovation at that time, in his Oxford Street barber’s shop, as a sideline business. In 1969 the business was sold to a Manchester business man, and later it was sold to Whitecross plc. Mr.

Barry Shillito who had been the Mill Manager since 1969 then purchased it,  specialising in making elastic and braid products which were supplied to manufacturers of domestic and sports goods all over Britain. Foreign competition took away his trade, and he had to close in  August 2000.

Directly opposite on the other side of the road is Elms Avenue, and at the right hand corner of this was Elms House. In 1815 it was owned by Mr. Philip Wright, who was followed soon after 1850 by Mr.James Crossley senior.

By 1875 Mr.W.C. Haslam, the owner of Pentrich Colliery was the owner. The fields that stretched from the house almost to Springfield House and down to Brook Lane, became known as Haslam’s Fields. Mr. Haslam died there in 1903.

In 1871 and 1895 the house is shown as the residence and surgery of Dr Josiah Allen, who must have rented part of it when he moved from Nottingham road, where he lived in 1868. He was also the father of Miss Percival Allen, an opera singer of some international repute, and it was he who took Barnes Wallis’ father as a partner.

Immediately below the entrance to Elms Avenue is a small grassy piece of pavement where one of the town’s last stone water troughs stood. This used to be the place where horses were watered after hauling their loads up from Marehay.

Slightly further down the road Providence Street will be found on the left, and it was near here that the town’s southern toll gate used to await visitors. However this street, then but a bridle path, and Cemetery Lane which joins it at the other end, were the slip-road used to avoid the toll. At the lower side of the entrance to the street is Robin Hood House, reputedly a beerhouse of the past, called the Robin Hood and Little John.

You are now in an area known as Green Hillocks that earlier included everything down to the Holly Bush public house at the bottom of Brook Lane. Today the name is usually applied only to the area around the forked end of Pease Hill Road, and down to the top of Brook Lane. Immediately below the lower side of the fork, on the site of the traffic island that was completed in 2002, there stood from 1865 the Saint John’s Church of England Primary School. Proud of its reputation for a quality product in a small community, the school closed in 1970 because the cost of modernising and refurbishing it was prohibitive. It was used by the County Youth Club until it was demolished as unfit in 1974.

Below the island stands a church that started life as a corrugated sheet construction in 1871.The foundation stones of the brick church were laid in 1873, both churches being dedicated to St John, as chapels of the Parish Church. St John’s Church closed for financial reasons in 1987 and it was sold to the Pentecostal Church, who renamed it as The Springs of Living Waters in 1990. 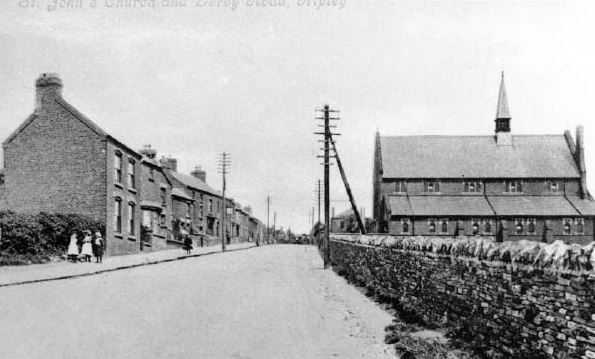 In front of you down the road you can see a right hand fork which you follow into Brook Lane. The brook that used to be known as “Johnny’s Brook” presumably because of its proximity to the old St John’s Church, runs under the road, down the back of the Derby Road properties, and crosses under that road at the bottom of Bowler Street. It then turns again to run to Denby to join the Bottle Brook.

A little further down Derby Road the area on the left, Whiteley, was recorded as Whitelee in 1220, when it appeared in the charters of Ralph of that name, thereby making it one of the oldest names in the town. Historical records show several different spellings.

Whiteley House on the right is opposite the Whiteley Autofix Service Station. Against the house’s frontage is another old mile post telling us that it is 9 miles to Derby.

The Marehay Garage at the bottom of the hill includes the spot where the railway that came to Ripley in 1856 crossed the road at an angle to pass behind the last house on the left side of the road. A single track came from Derby, serving Kilburn, Denby, Whiteley and Marehay Collieries, and ran in a curve from the crossing, to the station that stood back from the highway at Pease Hill Road. The station had three trains a day each way during the week, and one on Sundays.

Transport to and from the town was by horse drawn cab starting from the Red Lion. That was the arrangement at Ripley’s rail terminus until 1890 when the track was extended across the road, onwards to Albion Street, and up to the new station at Nottingham Road. Ripley Colliery had been sunk by then, and could now be served by rail. The new line was extended to another station at Butterley, but that closed to passenger traffic except for specials in 1926, and then Ripley Station did likewise on 1st June 1930. It carried on as a goods station until it finally closed altogether on 30th March 1963. The County Council later made the trackway into a public greenway across Ripley in 2003, forty years after the last train ran.