As the Ironworks developed and expanded during the early 19th century, so did the need to develop ancillary departments to manufacture the Company’s products such as bridges, steam engine boilers, locomotives and a large range of other items. By the end of the 19th century the department carrying out this type of work was known as the Boiler Shop later to be known as the Constructional Department (a.k.a. The Bridgeyard). It can best be remembered as the long workshop running parallel to Butterley Hill down towards Butterley Corner.

Possibly the earliest reference to this department’s activities can be found in the Penny Magazine article of 1844 which is quoted below:

‘In an open space of gound between some of these buildings, the larger structures of cast iron are put together and adjusted before being sent from the works. All the arches, suspension bridges, roofs and other structures now so frequently made of cast iron are always put up in a more or less complete form at the works of the manufacturer before delivery and a large open space is necessarily required for this purpose. In the open area above alluded to, there are railways laid down, cranes erected, and all the appliances for raising and adjusting the ponderous masses of cast iron which enter into the formation of such structures, many such masses often weighing from ten to twenty tons. Among the engineering works thus made and adjusted at Butterley have been Vauxhall Bridge*, a fine railway bridge at Selby, another near Nottingham, bridges and castings for the Caledonian Canal, for Dublin Harbour, for Leith Harbour, for the East and West India Docks and others of analogous character.’ 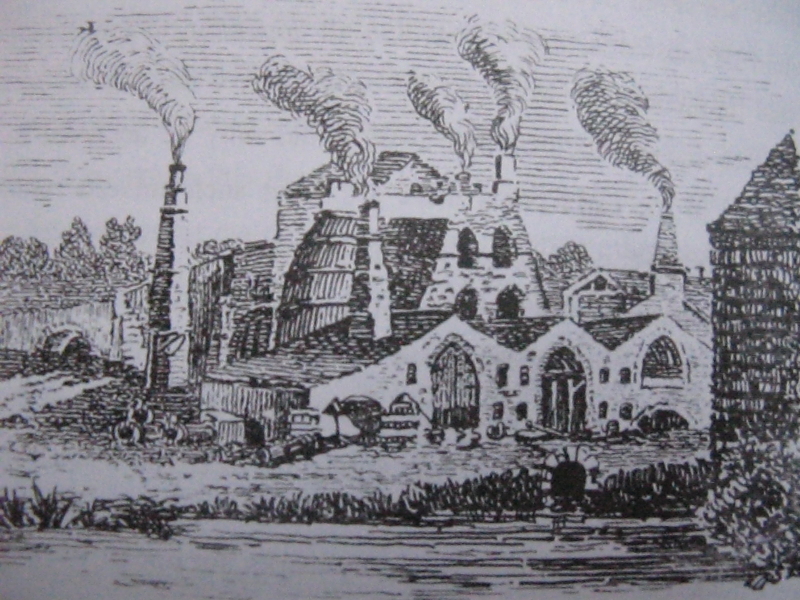 *An interesting point relating to the Vauxhall Bridge over the Thames (1816) was that the Company pulled out of the contract to erect it as the individual components were delivered unmarked and in the wrong order making erection virtually impossible. After this fiasco, Jessop Junior decreed that all structures would be trial erected at Butterley before transportation, a policy which was upheld throughout the following 190 years

Another later report which appeared in the Machinery Market Magazine of March 1st 1886 described the Bridge and Boiler department as follows:

The Bridge and Boiler Departments

‘On the right hand side of the blast furnaces but further up the works, lie the bridge and boiler departments. It was to be noticed here that hand riveting has been to a great extent abolished and in its place were seen steam riveting machines. Amongst the work in hand in the course of construction was to be seen a bridge, 264 feet long for the New South Wales Government. Besides this bridge were noticed several others in the course of construction for home, colonial and foreign roads and railways. The bridges constructed at Butterley are famous at the present day, even more than they have been in the past, for the thorough soundness of the material** used and the exceeding skilfulness with which they are put together.’

The process of drilling, as carried out at these works deserves mention. Numerous special machines are employed for this process and a department is set aside exclusively for the purpose. Nearly a dozen drilling appliances were at work at the time of the visit and the rapidity with which each did its work is worthy of comment. Several of these machines had as many as ten spindles drilling as many holes simultaneously, and all to a perfect gauge. In passing, were noticed many slotting machines, lathes and other tools which form the compliment of an engineering shop. One of the latter tools particularly attracted attention, for though old fashioned, it did its work as accurately as a most modern appliance, albeit not so rapidly.’

** This material may possibly have been steel as opposed to the more commonly used rolled wrought iron as the Steel Works at Codnor Park had begun production a few years before. 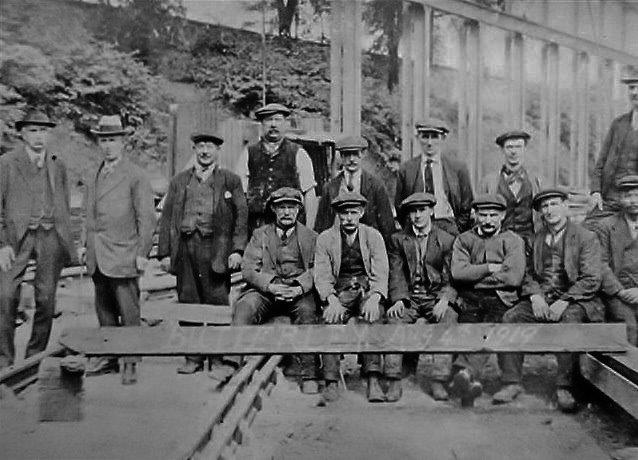 One of the earliest photographs relating to the department was taken in 1919. This was of erectors undertaking an extension of the workshop southwards up Butterley Hill. This was known as No.8 Shop. The location of Shops 1 -7 is unknown. One theory is that much earlier workshops were numbered as such, although the Machine Shop was as far as is known, never referred to by a number. Another possibility is that the numbering system may have been connected to the Forge shops at Codnor Park as material rolled there would have been transferred to Butterley for fabrication in the constructional shop e.g. boiler plates for steam boilers and rolled structural iron for example, for St Pancras station.

By 1936, following the Depression of the late 1920’s and early 30’s, the order book significantly improved requiring another workshop, designated No.9 Shop, to be erected alongside No. 8 shop. The erection of this shop was well photographed (see attached photos) and its design was special as the roof was constructed using welded frames as opposed to riveted trusses. No.9 Shop was specifically used for the preparation of steel plate prior to being fabricated into for example, designated structures or cranes. 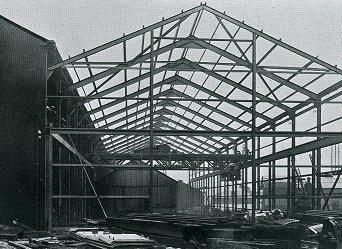 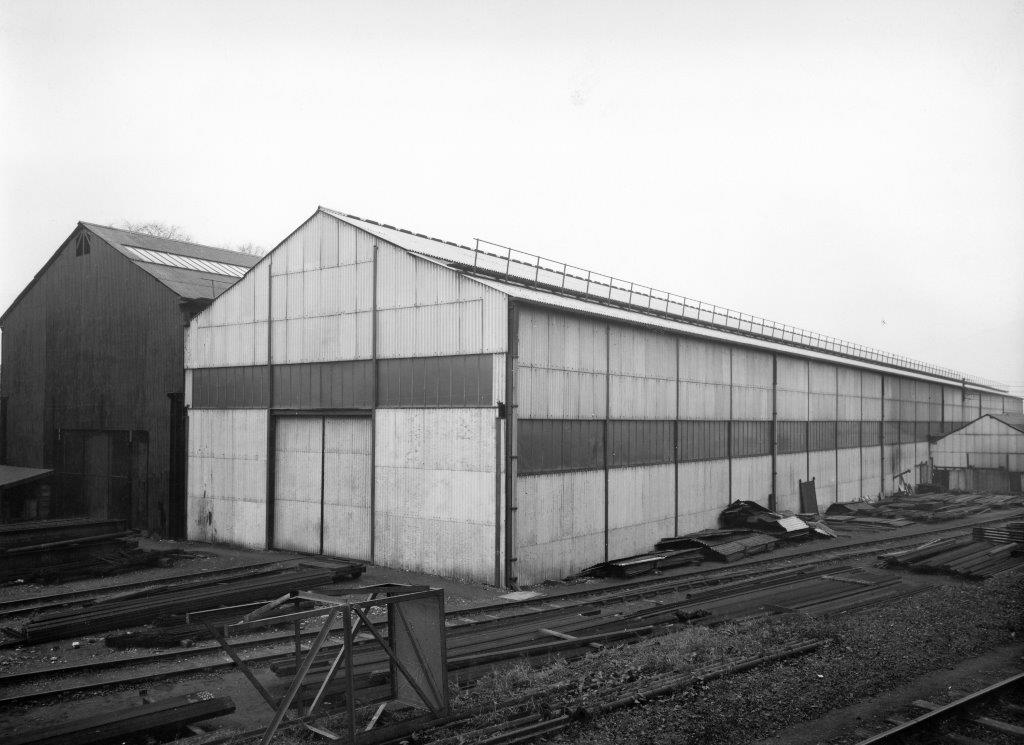 Several takeovers by Butterley in the 1970’s, 80’s and 90’s eventually resulted in the closure of the Telford Works of Norcross. With fabrication work being transferred to Butterley, the Construction shops underwent further major expansion, with the building of No.10 Shop and the connection of all the shops with the newly expanded Machine and Fitting shops. This enabled huge structures to be built such as very large overhead cranes. Special items like the Falkirk Wheel, Portsmouth’s Spinnaker Tower and other structures could be manufactured with relative ease compared to previous practice ( see Section on ‘Structures’) 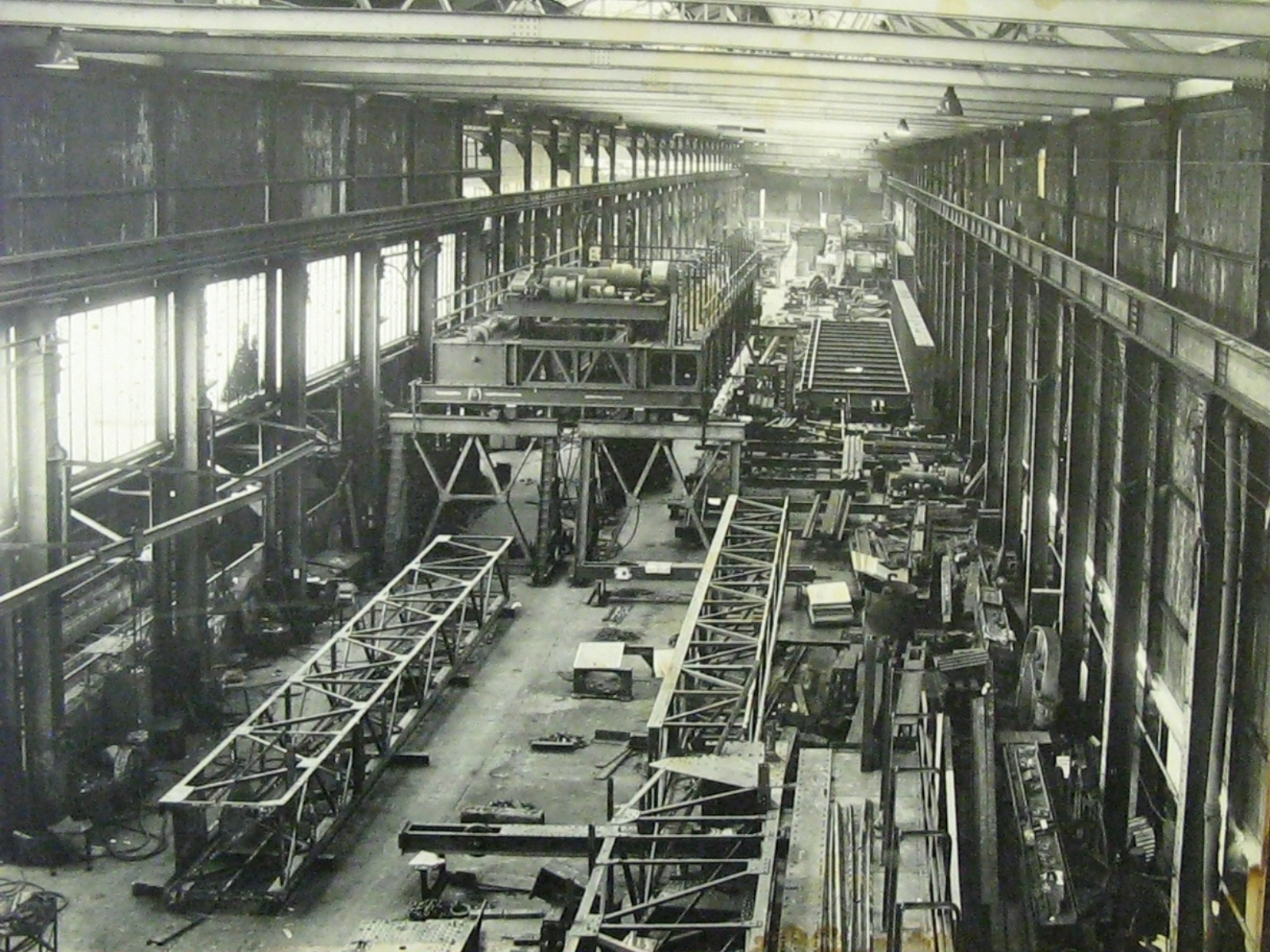 The sad decision taken in 2009 by the final owners, the Meade Corporation, to close down the Company resulted in the complete Construction Dept. being demolished along with the relatively new fitting shop. So ended 219 years of structural fabrication at Butterley. 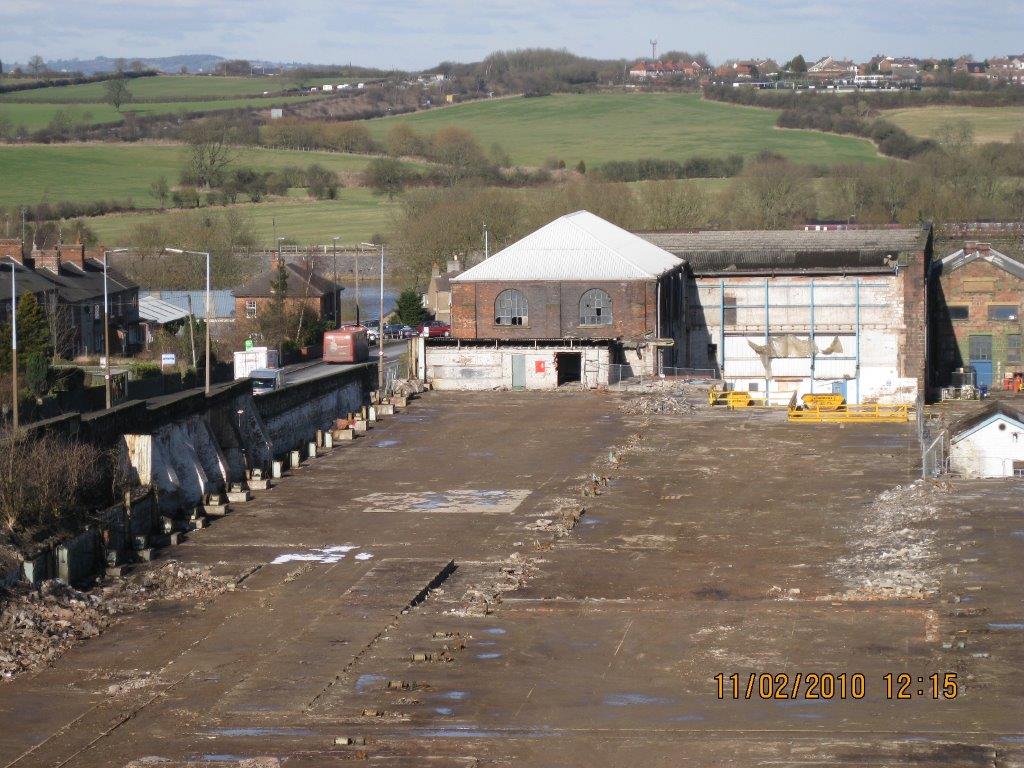