Probably the first production facility developed in the late 1790’s was the cast house (a.k.a. the foundry), located in front of the blast furnaces of which there were three by 1806. Pumps and engines began to be manufactured during the 1790’s and it is therefore fair to assume that a workshop facility had to be established for the machining and assembly of these items. As the Ironworks developed and expanded during the early 19th century, so did the need to further develop these facilities these being described in early literature as an ‘engine manufactory’.

The earliest part of the engine manufactory still stands today (2018). Research by the Ripley & District Heritage Trust suggests that the earliest map showing the building is that produced by Burdett in 1835. The map (part of which is shown below in the L.H. photo) indicates the line of the Cromford Canal tunnel passing under the workshop. The thicker section of the building, indicated by the arrow is believed to be that part which still exists today. The interior can be seen in the R.H photo (the part beyond the blue cast iron columns) taken after the Company closure in 2009. 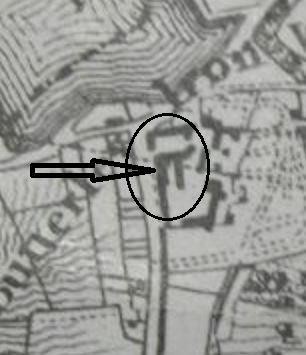 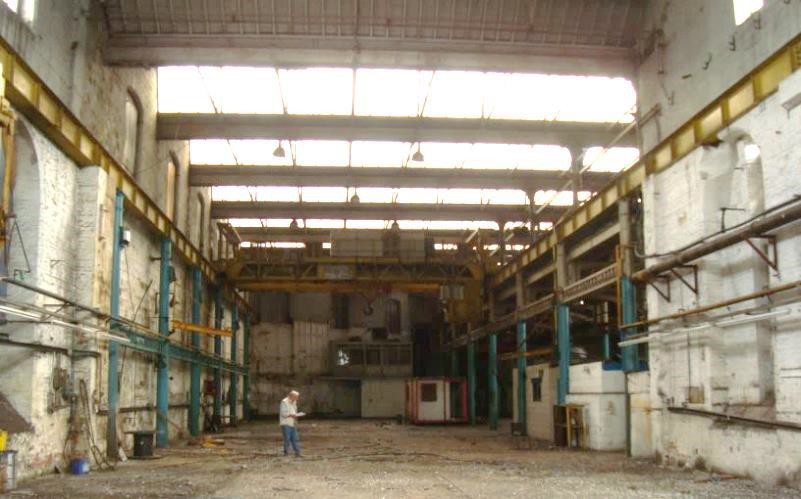 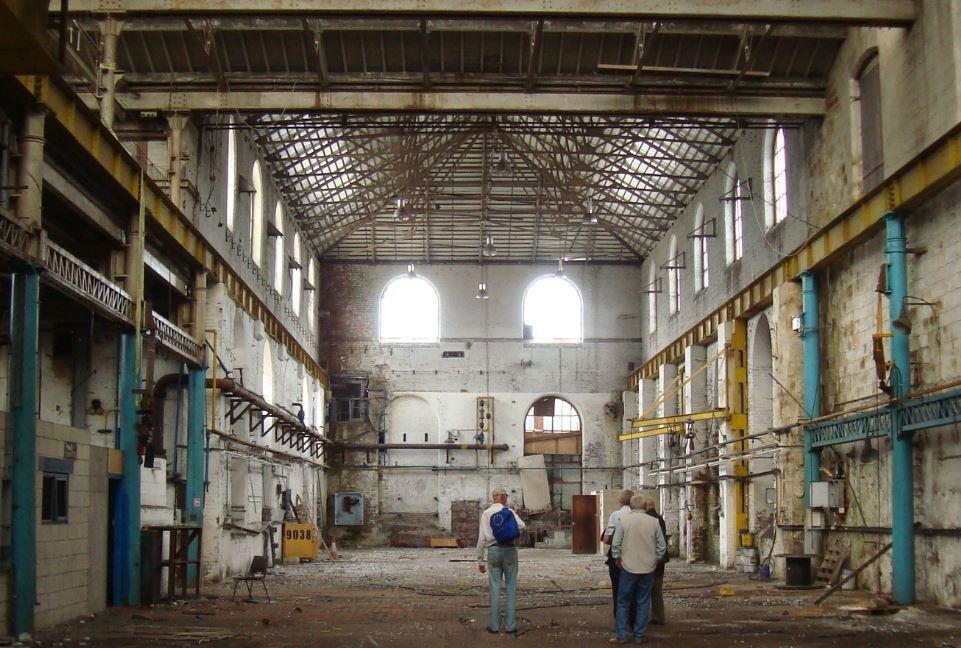 It is considered probable that the original building was lower than that shown above, the roof  trusses being supported on the stone columns now supporting the yellow overhead crane track. Further expansion of the ‘engine manufactory’ is believed to have taken place towards the end of the 19th century, the original building being extended parallel to Butterley Hill to Butterley Corner, using (presumably installed at a much later date) the blue cast iron columns to support the overhead crane track

Possibly the earliest reference to this facility can be found in the Penny Magazine article of 1844 which is quoted below:

‘Beyond and around the furnaces and their foundries are various other buildings pertaining to the manufacture of pig iron and cast iron and the greater part of the remainder are occupied by engineers and machine makers. In some of the lower buildings are powerful machines of various kinds for working up iron and other metal into various parts for steam engines and other pieces of mechanism. Planing machines for producing a perfectly level surface on a plate of metal of any size, lathes for turning shafts, pillars and all other articles of metal having a circular section; other lathes for cutting screws of almost every diameter and size of thread; drills for piercing holes in metal, whether an eighth of an inch or three or four inches in diameter, whether through a mere sheet or through a thick plate; boring machines for finishing circular surfaces which have been roughly produced by casting; filing machines for giving to small pieces of metal the form and smoothness which are usually given by hand files; these are some of the various machines with which the engineering shops are provided, by whose aid the workmen are enabled to fashion all the parts of a steam engine or other pieces of apparatus.’

A later report which appeared in the Machinery Market Magazine of March 1st 1886 described the Engine Works as follows:

‘The engine works at Butterley have turned out many fine specimens of work. Amongst others may be mentioned the pumping engines for Shrewsbury, Amsterdam and Oxford Waterworks, many large Cornish engines, including that at Clay Cross which has an 84 inch cylinder and 10ft stroke, which is made, it is said, with the first wrought iron beam ever employed for large engines. In this department were found engines in different stages of manufacture, including a splendid pair of engines for one of the Company’s pits at Silverdale. The erecting shop consists of two spacious floors and this was fairly employed with work. The different tools here were of a mixed description, some being of the most recent invention and others having been in active work for many years past. The work turned out from this department including winding, hauling, mill and other engines has formed a staple trade for more than half a century.’

The top picture above shows a portion of the 1880’s O/S map, clearly showing the extended workshop. It should also be noted that railway lines cross each other just to the right of the encircled area. This crossing point was in fact a turntable. The middle picture is taken from the 1917 O/S map. It shows that the building has been extended to cover the turntable. The turntable can still be seen within the building today.

In the early 1900’s it became known as the ‘Engine Shop’, complete with a small brass foundry, eventually becoming known as the Machine Shop, which comprised of several sections such as the fitting shop, tool room, marking off area and light and heavy machining sections. The photo below, taken in 1937 / 38 outside the adjacent stores shows the Engine Shop workforce. The names of all the men are also included. 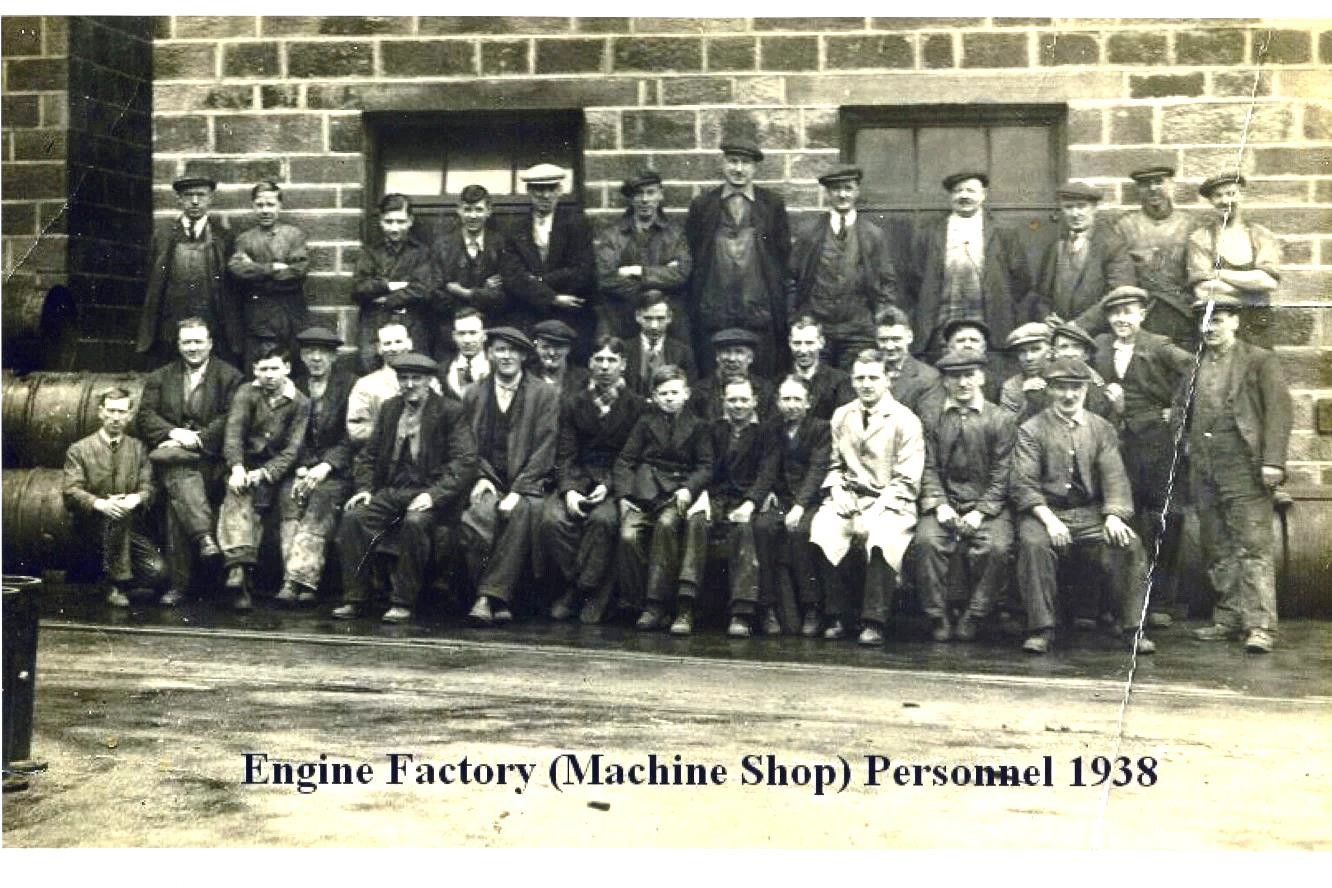 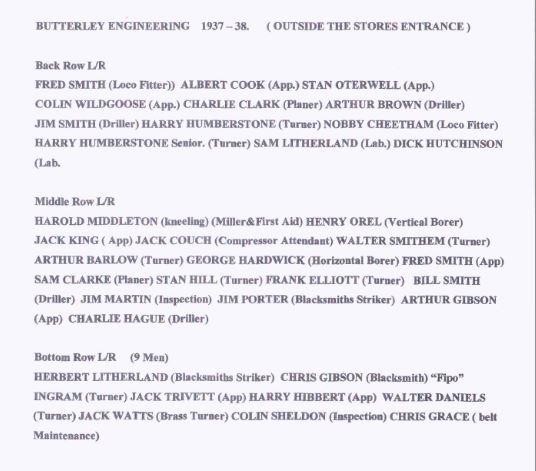 During the 1990’s the machine shop was incorporated a new very large fitting shop (see the circled buildings in the photo below) and a considerable number of modern machine tools were installed. The shop remained in full production until the Company closed in 2009 having been involved in the production of iconic structures such as the Falkirk Wheel and Portsmouth’s Spinnaker Tower. 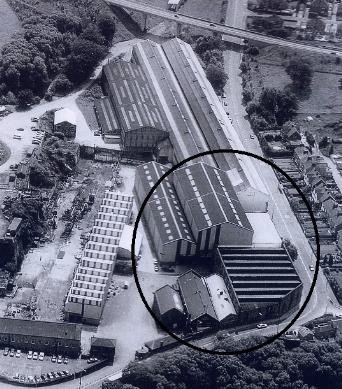 The old listed machine shop buildings still stand today (in 2018) awaiting possible redevelopment as part of ambitious plans to create a visitors centre along with other possible ideas currently under review.