Think of the first steam locomotive and you might imagine Stephenson’s Rocket.  In fact there were many experiments before Stephenson’s, in which Ripley’s Butterley Company played an important part.

Trackways or tramways had been in use for over a hundred years, originally made of wood and later of cast iron, with trucks pulled by horses and then early steam engines hauling trucks up inclines by cables. In the early nineteenth century, though, engineers were doubtful whether metal wheels of steam locomotives would have sufficient grip on metal rails to pull heavy loads. Although Richard Trevithick had demonstrated his “Catch Me Who Can” locomotive to a paying public in 1808, other solutions were being tried.

It appears that the Butterley Company had been making stationary engines (for pumping water out of pits) and cast-iron rails before 1812. It was probably this that led William Chapman, a Newcastle engineer, to commission them to build for the Heaton Colliery in Newcastle his design for a chain driven steam locomotive which hauled itself and its load along by winding itself along a fixed chain.  It wasn’t a success : the chain kept breaking and the colliery was reputed to have lost £3000 (a great deal of money then) in the experiment.

The following year, perhaps inspired by the Chapman, Butterley’s Chief Engineer, William Brunton came up with his “Mechanical Traveller”, a steam locomotive that used two “legs” to push it along, thus avoiding the problem of friction on the driving wheels. Although it is regarded as a curiosity now, it did apparently work for a while, pulling empty trucks up the incline from Bullbridge to Crich quarry to be filled with limestone and then lowered down the incline by gravity. A second model was sent to Newbottle Colliery in the North-East and worked for a while until a new boiler was fitted in 1815. The engineer overcharged the boiler and it exploded, killing 14 people. 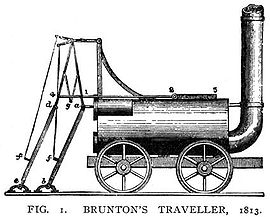 Chapman continued to design steam locomotives, including the “Steam Elephant”, a replica of which now runs at the Beamish open air museum in County Durham. Butterley also continued to build stationary steam engines and to supply cast iron rails. Much later, from the 1880s, the company even built steam locomotives for its own use.

It was left to George Stephenson and others to develop the steam locomotive; on 27th September 1825, Stephenson’s “Locomotion” pulled the first public passenger train on the Stockton and Darlington railway. It was not until 1829 that Robert Stephenson built the “Rocket” which won the Rainhill Trials and operated on the Liverpool and Manchester Railway.

We can only wonder what might have happened if the engineer on the “Mechanical Traveller” had not been so keen to show off his new boiler, or if William Brunton had remained at Butterley after 1815 : perhaps Ripley would be known as the birthplace of the steam locomotive !