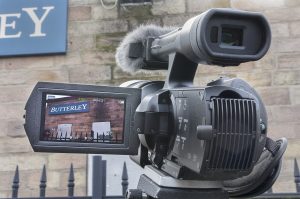 Founded in 1790 the company became one of the first industrial giants and the largest employer in the Ripley area .

The Trust’s Tim Castledine, a fourth generation former employee of the Company and whose idea the documentary was explains:

“The Butterley Company was an Industrial Complex, even before the phrase was invented. It is probably most famous for making the roof of St Pancras station, and shortly before its closure, the Falkirk Wheel and the Spinnaker Tower at Portsmouth. We at the Heritage Trust, feel that the Company is becoming forgotten and many younger people only know of the derelict site that sadly marks where the Company once was. We want this video to put the Butterley Company back on the map and to remind people that it was one of the world’s finest engineering companies”.

The Company was founded as Outran and Co. in the reign of George III in 1790 by a 26 year old surveyor from Alfreton, Benjamin Outram and Francis Berisford, a wealthy landowner from Ashbourne.  A year later they were joined by a famous canal and civil engineer, William Jessop and John Wright a Nottingham banker.

By the early 1800s they were selling coal. pig iron, iron pipes and steam engines distributing them nationwide via a unique underground wharf in the Cromford Canal Tunnel and then onwards via the Erewash Canal and the river Trent.

Soon they had built their first blast furnace above the Cromford Canal Tunnel at Butterley Fields a mile north of the hamlet of Ripley. In 1794 they bought land with valuable coal and iron reserves alongside the Cromford Canal at Codnor Park eventually building a foundry and forge opening in 1818.

Outram and Jessop respectively pioneered the use of plate rails and fish bellied edge rails, the later being the forerunner the modern rail in worldwide use today. The Company was also building steam locomotives sixteen years before Stevenson’s Rocket. Their stationary steam engines helped drain the Fens and the polders of Holland and their marine steam engines helped power the Russian Navy. Wrought iron made at their Codnor Park works was used on Telford’s Menai Straights Bridge and on Brunel’s SS. Great Britain steam ship.

In 1814, Jeremiah Brandreth and his revolutionaries from Pentrich sought to march on London and overthrow the government. On route, they attempted to raid the Company for its pikes and muskets and to recruit men but were rebuffed by its General Manager, George Goodwin. Having lost face and men after the encounter with Goodwin, they were arrested on the outskirts of Nottingham and subsequently executed or deported. Given the civil unrest of the time, the management of the Butterley Company may have prevented what might have become a nationwide revolution.

As the century progressed, the fortunes of the Company rose even further, recruiting some of the best engineers

in the country and it continued to expand its quarries, mines and ironworks, building bridges across the Thames in London and rivers in India and the Empire. The power and influence of John Wright, the Nottingham banker who financed the Company grew until in 1830, his son Francis Wright, became the main shareholder and owner of the Company and with the hiring of Sir John Alleyne as Chief Engineer in 1852, Butterley created what has been described as one of the wonders of Victorian engineering: St Pancras Station.

Success followed success and by the start of the twentieth century the company employed 10,000 people.

New model villages at Codnor Park, Ironville and Hammersmith had been built by the Company for its workers and their families and by the end of Queen Victoria’s reign Ripley had grown to be a prosperous town.

The documentary aims also to show how the Company and its owners, the Wright family, shaped the social structure of the area fostering the close knit communities that typified the area both in the 19th and 20th centuries.

The Producer and editor of the documentary, Mike Frost explains,

“The 1960’s and 70’s saw the beginning of the end for the Company. As well as featuring the magnificent achievements that were the Falkirk wheel and Portsmouth Spinnaker, we want to show what actually happened when the company was sold to the Hanson Group and the Wright family eventually lost control, the point at which the Company started the decline which led to its closure. We’ve interviewed some of the Wright family that were involved in the Hanson takeover as well as some of the

workforce who were there at the time. In addition, we are appealing for anyone who worked for the Company who may have photos or film about the Company and would like to talk to us about their experiences or recollections to get in touch with us”

It’s no exaggeration to say that the Butterley Company made Ripley and District, not only in the expansion of 18th century hamlets like Ripley and Codnor Park but the hard and often dangerous work in Butterley’s foundries and mines helped form the character, resilience and independence of its people. With this documentary, available from November 2017, Ripley and District Heritage Trust plans to celebrate the rise and fall of our local Industrial Giant that was the Butterley Company.

The Ripley & District Heritage Trust is appealing for any photos, films, videos , slides or memorabilia that readers may have about the Butterley Company as well as any recollections or stories you would like us to record.

If you believe you have anything of interest please phone Tim Castledine on 01773 746954.

We look forward to hearing from you