The following article has been transcribed from the Company House magazine ‘Ad Rem’ Issue No.9 Summer 1955, entitled ‘Roll Out The Wagons !

“In the past eleven years the turnover at the Butterley Company’s Railway Wagon Works at Codnor Park has risen nearly tenfold and the production of railway wagons has reached the rate of one built every 95 minutes. The following article tells how this side of the Company’s activities has developed from a small adjunct of the steel-making plant into a major enterprise with a home and export turnover worth more than £1,000,000 per year.

There seems to be no actual record of the date when the Wagon Works came into existence, but there is evidence that wagon building and repairs were started before 1880. The original purpose of the Works seems to have been to repair the special wagons required at the steel making plant at Codnor Park, and operations were on a small enough scale for the full activities of wagon building and repairing to be housed in the building that now comprises the general Offices and stores.

In those days about 30 men were employed including four blacksmiths and a number of wagon builders, and their output was four new wooden wagons of 10 ton capacity per month. The blacksmiths were responsible for producing all the ironwork on the wagons with the exception of the wheels, axles and castings, and also for providing the ironwork needed on the Butterley Estate.

In the early days of the Wagon Works it is understood that Mr E. Leslie Wright, the late Managing Director of the Company personally supervised the Departments activities. The two main buildings that now house the processing machinery for the Wagon Works were then used for the Deck Beam Mill so that facilities for moving crippled wagons into the original building of the Wagon Works and moving repaired and new wagons from that shop were very limited. The wagons had to be moved each day entirely by manpower onto the simple wagon carrier that ran down the centre of the shop.

By 1913, when Mr F. I. Smedley took over as Manager, the Deck Beam Mill had ceased production, leaving two bays each 400ft long by 80ft wide and covered with wrought iron roof work, for conversion to wagon building and repairing. These new works which came into operation in 1917 were badly needed. As the Company were also colliery proprietors, production at Codnor Park also included the building of pit tubs – these being of wooden construction as then used in mines. Again, the original Wagon Works building also had to house the gas engine that produced the electric power for the Forge.

After the move in 1917, Mr Smedley for some years concentrated the Works on the building of new wagons and steel pit tubs. It was he who patented the famous Butterley lock joint and top roll, producing by this means both pit tub and wagon bodies which were keen in demand those days, their chief advantage being the easy replacement of body parts. Although the gradual increase in the size of over the years has led to other methods of construction in this field, the lock joint and roll top are still being largely used in the building of pit tubs.

Expansion was rapid in the period following the First World War.  It is on record that 1,000 tubs a week being built shortly after the Armistice. These were chiefly bodies  comprising two sides, two ends and one bottom – not quite the pit tub as we know it today which is complete and ready for use in the mines. Nevertheless, it was an impressive achievement, particularly when we remember that a growing number of new wagons and containers were being built at the same time.

The wagons were of both wood and steel, for this Company was amongst the first to construct a railway wagon in steel. Thought began to be given to the use of the railway container immediately after the war, and between 1920 and 1930, many thousands were built at the Works for the home and continental markets. Production had to be maintained on a large scale to meet these various demands. The Company’s interest in the coal industry required a fleet of many thousands of railway wagons, which were all built at Codnor Parkin addition to the large numbers supplied to outside undertakings. On Mr Smedley’s appointment as General Manager of the Company’s engineering activities, the late Mr A.P. Coote took over control of the Wagon Works until appointed the Company’s London representative.

Throughout the last World War, the Railway Wagon Works were entirely engaged on Government contracts. One of the most important jobs undertaken there was the building of some of the pontoons required for the Normandy landings. Pontoons were also built towards the end of the War under an Admiralty contract, and it was this type of work that perhaps indicated the full possibility of extending the Company’s field of activities.

The Ministry of Supply Agency Factory which the Butterley Company operated at Codnor Park, and which supplied Churchill tank track links in such large quantities throughout the war, eventually reverted to the Company and after conversion was used to provide assembly shops for the Wagon Works.  These shops more than doubled the floor area previously occupied by the Works and gave ample space for wagon assembly and line production.

As a result of this increased capacity, combined with new production plant and more efficient methods of assembly, the rate of wagon building has risen at a striking rate in the post-war years. In 1945, 81 new wagons were completed at the Works; from 1949 onwards a total 1,000 wagons a year has been steadily exceeded: and by 1953 the figure had risen to 1,400 – one wagon built every 95 minutes!

The policy for some years has been to endeavour to build as many types of wagons as possible; this has been brought about by concentrating production on at least two types of wagons in large numbers, whilst accepting small orders for differing special types.  A particular effort has been made to meet the requirements of private users of internal wagons, and many specially constructed wagons for specialised purposes have been built at the Works over the past few years.

The export market for wagons has been developed with considerable success, and substantial orders have been completed or are in the course of execution for New Zealand and the Australian Continent. From 1945 up to the end of 1954, 9,000 railway wagons were built  and despatched to the Home and Commonwealth Railways. The steady and substantial increases in turnover brought sales in 1954 to a level of over £1,100,000. Three of the main factors that have contributed to this achievement are: employment of further capital, increased production facilities, and use of mass production methods. But these factors alone would not have been enough to secure such a striking rate of progress without the whole-hearted enthusiasm and co-operation of  all the personnel at the Wagon Works whose loyalty has, in turn, encouraged the management in their responsibilities and devotion to their job.

The outstanding results achieved since the war reflect the greatest possible credit on Mr Granville C. Walker, who became Department Manager in 1944. It is he who has been largely responsible for creating such a successful team – one with the rare distinction of having increased sales nearly ten times in eleven years!

Whilst today we consider containerisation as a modern new way of transporting goods, containers were being manufactured by the Company for road and rail companies as early as the 1930’s. Examples of these are shown in the photographs below.

In addition to the manufacture of wagons, pit tubs and containers, the Wagon Works undertook other fabrication work during World War II and in the years leading up to closure in 1975. An example of the war work was the production of pontoons used to support the floating bridge between the offshore Mulberry Harbour caissons and the shore on Gold and Omaha beaches after D-Day 1944.  As was the case with much of the war work, no one knew what the fabrications were and where they were going, all being revealed as events unfolded. 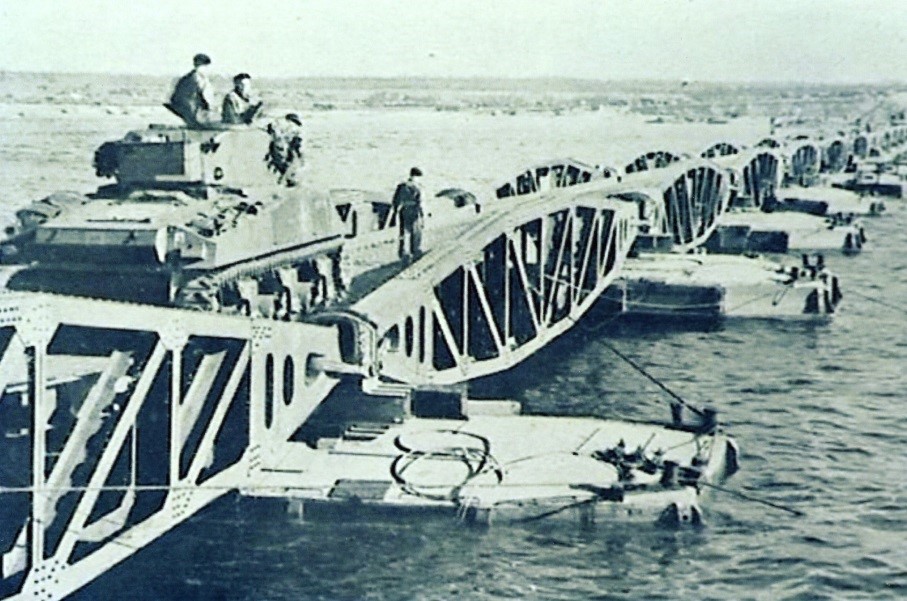 In 1959, the Wagon Works received an order for a very special type of wagon to be used for the bulk transportation of powdered cement. Many construction projects were underway in Britain at that time involving the use of hundreds of tons of cement. British Railways answer to road transport was to use a wagon which could be quickly emptied into the customer’s on-site silos by being pressurised with compressed air.

Sixty wagons were produced by jig welding the sections together as shown in the photographs below. These were used to transport cement from the Portland Cement Co’s works to many large construction sites around the country, for example, the Hunterston nuclear power station in North Ayrshire, Scotland on the Firth of Clyde coast.

The target was to unload a full wagon of 20 tons of cement in 4 minutes using a pressure of 9 pounds per square inch. The Wagon Works were required to hydraulically test them to 30psi, and later to test the finished wagon to 20psi.

Throughout the 1960’s the wagon trade gradually declined, due partly to reduced orders from the NCB and also the effect of Dr Beeching’s railway ‘axe’. The Wagon Works gradually became more dependent upon steel fabrication work including Butterley patented underground bunker conveyors for coal mines. Bunker conveyors were used as a means of temporarily storing coal underground in the event of problems raising coal to the surface, enabling work to continue cutting coal at the coal face. The first was installed in 1959 at Holditch Colliery in the West Midlands and by 1964 over 60 units with vastly increased holding capacity had been installed in other collieries.

The Company also helped to get Joe Bamford with his JCB tractors on the road to global success by welding loader buckets and arms, (the Foundry at Ripley also supplying many types of castings for the hydraulic components).

However, after economic problems in the early 1970’s (the 1973 Miner’s Strike, the Oil Crisis and the 1974 three day week), the Works were closed down in 1975, the buildings being demolished and the whole site opencast mined for coal. So ended nearly 170 years of engineering expertise at Codnor Park.