On the left hand Church Street – Nottingham Road corner, from the early 19th century there was the Cock Hotel, a coaching and business men’s hostelry. Although it is not mentioned in trade directories until later, it is known that a branch of the anarchistic Hampden Clubs met here in 1816. It has been called Central Park,The Matrix and other names but  reverted to its original name in December 2004.

As you start to move off up Church Street, and reach the Amber Value shop, you will see if you look up, that there is a fairly long stretch of roof over two buildings which were Redferns’ emporium. Opening in1871 with a drapery business in a small shop, they expanded to take over several shops where they had departments on two floors selling a complete range of ladies and gentlemen’s wear, children’s wear, drapery and soft furnishings. On the top floor were seamstresses carrying out alterations under the supervision of Mrs. Redfern, and there was also apprentices’ accommodation. The salesrooms dealt with money by the system of canisters on wires that carried them to a central cashier.

When Redferns’ closed in the 1930s, the lower part of the premises was occupied by Woolworths’ until 1989 ; Amber Value followed a short stay furniture shop in 1979 when they expanded from next door, having moved from up the street, where they had started in 1976.The part that is now a motor spares shop, was the home of Burtons the tailors for 30 years, until they closed their doors for the last time in October  1979.

Across the street are two shops that are not out of the ordinary until you look up. The lower one of the pair was the first building wherein, having had an agency elsewhere in the town for eight months, the Nottingham Joint Stock Bank opened their first branch here on land that they bought from a Mr. Kiddy. Mr. Henry Righton, a “man well and favourably known to the inhabitants” was appointed the first Manager. In November 1873 they purchased “the Thorn Tree” site (presumably the site of number 33 Market Place, next to the Thorn Tree Inn), but in December the manager reported that he had sold it again. Twelve years later they moved to the new site on Nottingham Road, facing Church Street, and in 1905 they merged with the London and City Midland Bank. Later the name was shortened to the Midland Bank, and in July 1992 the Hongkong and Singapore Banking Corporation (HSBC) acquired the firm.

The next site for us to talk about is the Church Street Car Park. On this land until 1991 was the Baptist Chapel and School room. The Chapel was built in 1846 at a cost of £904. It was built in a Grecian style with a small burial ground in front of it. The Schoolroom and Manse were demolished in 1973, but the Chapel continued in use until 1991.

Next but one above this, the property was developed by Liptons but became Wilkinsons’ hardware and general stores. Two old whitewashed houses, one standing end on to the street and the other standing beyond it, were demolished in 1963 to make room for the shop. In the house that stood nearer to the pavement lived Mr.W.W. Shephard the solicitor, while in the other Mrs. Norman upholstered and sold chairs, and Mr. E.J. Norman ran an undertaker’s business until the early 1920s. Latterly Mr. R.S.D. Cash the solicitor used the house as his office until he retired.

Coming back to the right hand side of the street, the three shop windows next to the Church had for many years been the frontage of a grocery/provisions/victuallers’ businesses. In 1831 the firm of Thomas Ward and Company, established at Nottingham Road in 1829, were shown to be here, as grocers and chandlers, with their candle factory  in the buildings  behind the shop. By 1895 Bembridge and Cox had moved from the Market Place and taken over the business. Mr. William Bembridge was shown to live at Scarsdale House in that year, and he became a member of the Ripley Board, and then an Urban District Council member and a  Magistrate.

Next Mr. Hugh.B. Stansby, also moved from Nottingham Road to continue the service. After more than 30 years in business, in 1973 they sold out to Meadow Dairies, one of the early supermarket firms, but they were soon to be taken over by Fine Fare. When Liptons built the big store, across the road, Fine Fare closed!

U-duit then moved from Heage Road, into the part fronted by two windows, and a cafe occupied the top portion of the building until it was internally badly damaged by fire. U-duit moved into the smaller shop, and a furniture business eventually moved into their vacated part. That closed in 2002, and the present occupant moved in to sell carpets . 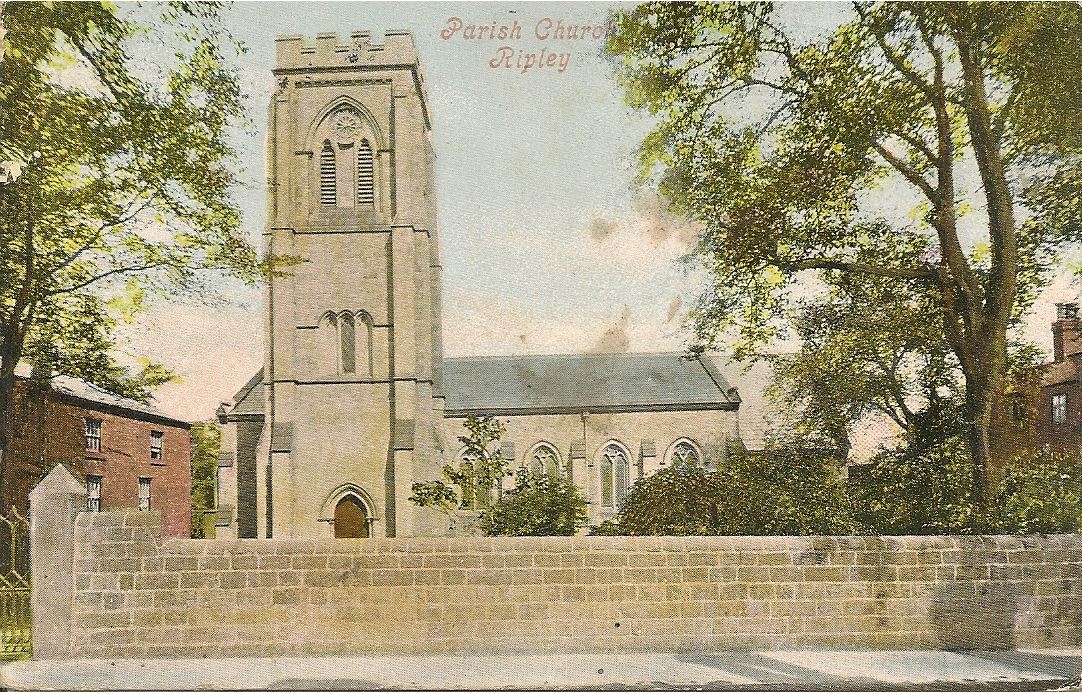 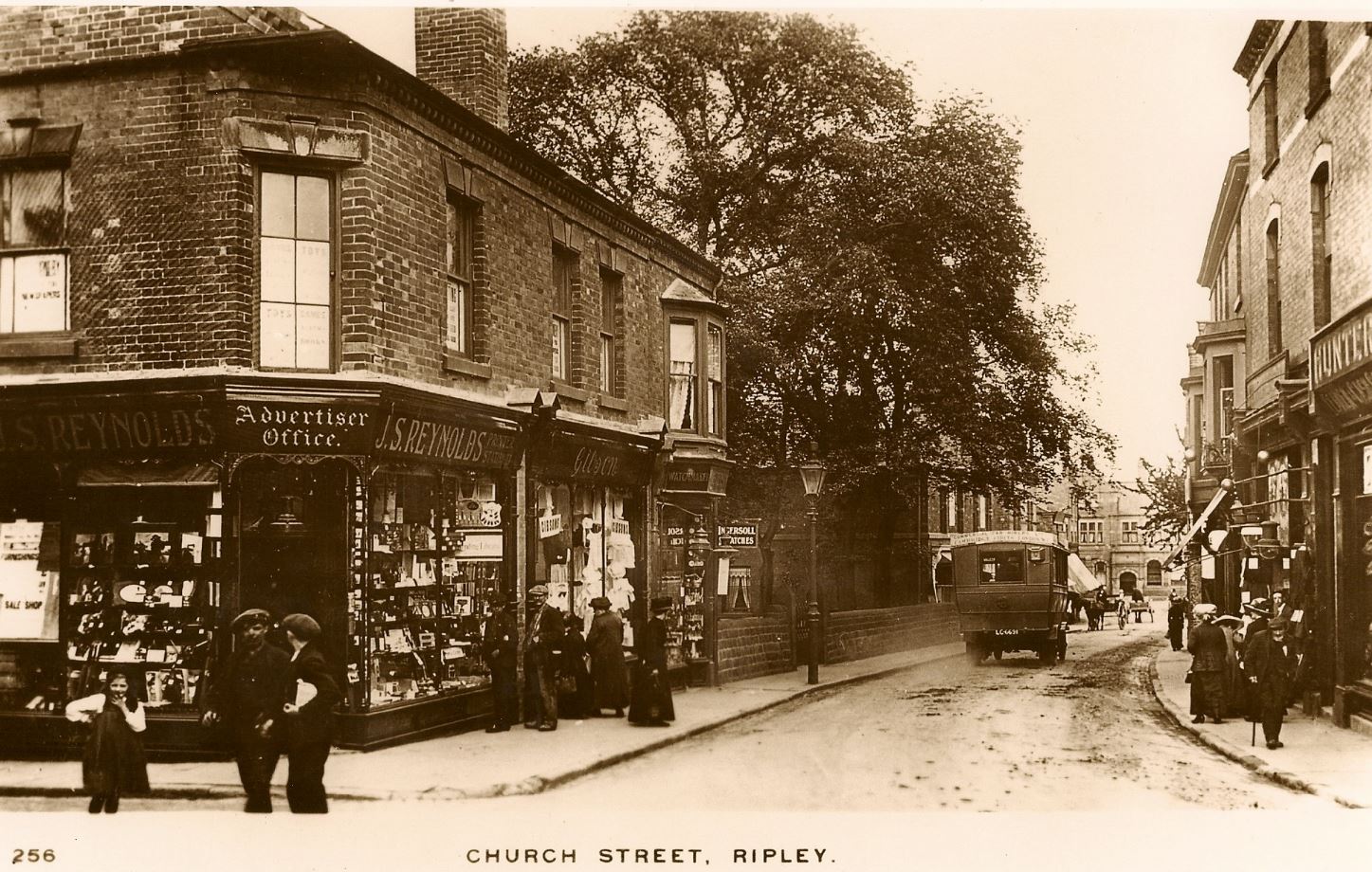 The building at the corner of Church Street and Moseley Street is recorded as being owned in 1857 by Mr. George Rowland, a printer who also sold clothing and stationery. In 1902 the Post Office also moved there, and the town’s first Telephone Switchboard was on these premises too. Around that time J.S. Reynolds, the printers took over, and later, when they moved to Nottingham Road, Mr. Spencer Taylor took this shop for his toys and fancy goods business. It was bought from him in 1946 by Mr. and Mrs. Henry (Harry) Godkin, who also introduced a news agency and tobacconist’s service. He was followed by his son Alan, who built up, from opening in 1966, a massive wholesale business as well, took over the next two shops down Church Street, and bought the news agency on High Street. He bought Mr. Rowell’s clock and installed it above the latter shop, but it was moved again to its present site on High Street in July 2001. Alan was regrettably killed in an air accident in October 1996, but with his son Tim at the helm, the family continued to expand. Alan’s widow was in charge of this Church Street shop, but she closed it in April 2000.

In 1866 Mr. John Copestake bought for £1,300 , the properties which stood on the left hand corner of Church Street and High Street. They consisted of a shop occupied by Mr. George Moss, a butcher, a warehouse and seven dwellings . He converted them into a shop, warehouse, candle house and five dwellings. In 1878 Mr.Copestake replaced them with a new building with shops, and a warehouse to house his wholesale and retail businesses, with spacious living accommodation above. The building remains much the same today. Boots the Chemists eventually took the High Street and corner part of this, and Hunters’ Stores occupied the Church Street part. When Hunters closed, Farrands grocery store took over until Ladbrokes opened their office there in 1979, staying until 2000. For a short time after that it was a charity shop, and then in April 2002 Affordable Design opened there. They closed after the shop front had been smashed in by an out-of-control car, around New Year 2005/6 . Later the present occupants Xplicit clothing moved in.

Boots moved to their present location in 1982, and their premises were bought by Amber Valley Council who refronted and refurbished them for use as accommodation for their Planning and Development Departments until the new Council Offices were opened. They renamed the building Market House, and when the Council staff moved to their new offices Derbyshire Careers Service moved in, followed by the County Education Department and Vocational Services, who have since moved out again, leaving the premises empty.