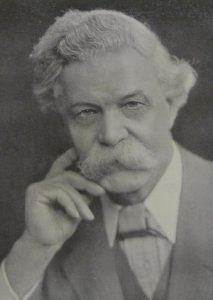 There are few first-hand accounts of our area in the past. Occasionally accounts crop up in diaries, like that of the Reverend Littlewood, vicar of Ironville in the 1870s, or Edie Barnes-Wallis’ comments on Ripley in 1886. One exception, however, is the book, now long out of print, “My Village, or Owd Codnor” by Joseph Millott Severn.

Severn was born in 1860 in Codnor. His father was a stockinger whose drinking and arguments with his wife meant that Severn spent some time living with his aunt and uncle, and his schooling was fairly basic. He left school at 10 to work on a farm and then in the local pits. Later he began attending night school, and became an apprentice joiner. He left Codnor in 1880 to work in London.

Sometime in the 1880s he reinvented himself as a “professor” of Phrenology, which was the belief (he would have called it a science) that someone’s character could be assessed by examining the shape of their head and the bumps on it.

Much later, in 1935, he published the book, which is a kind of memoir describing in loving detail his early life in Codnor and some of the people he remembered from it. Street by street, he describes the people who lived there: not only appearance, but attitudes and habits, good and bad.

On the second Sunday in August each year, on the field (now the car park) opposite the New Inn, the village held its Wakes: “outdoor games, sports and pastimes, running and feats of strength and prowess were indulged in, and the show folk, photographers, proprietors of roundabouts, swing boats, marionette shows, ginger bread, toys, and toffee stalls” all attended, “and the village ale-houses reaped a big harvest.”

Not that life was all games: he gives an account of a wife receiving news of her husband’s death in the pit, and vividly describes the open sewers which ran along the main roads, often deep and full of water and sewage, dangerous at a time when there was no street lighting; his uncle James was found dead in one of them.

He also describes how the villagers dealt with “wife-beating, cruelty to children, persistent falling out with neighbours, and wife and family desertion.” They would “ran-tan” the man: get together with all kinds of cans, pans and sticks, surround the man so that he could not escape and parade him round the village, making a terrific din as they did so. This made him “a wiser man, with less inclination to so offend again.” 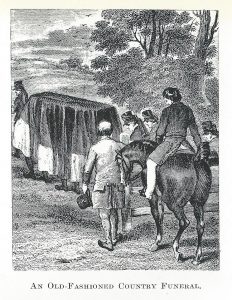 Then there was “an old-fashioned country funeral.” When money didn’t stretch to a hearse, the coffin would be carried by relatives from the house to the churchyard, all covered by the pall, an “immense, heavy, dark velvet covering, thrown over the coffin, which came down below the knees of the bearers, whose feet could be seen underneath.”

It is a rare portrait of the lives of ordinary people over 150 years ago.