The Trust’s vision is to develop a masterplan for the northern portion of the site (see Fig. 1, the Works Yard) which is encircled by the 1838 Pattern Shop, the Octagonal Gatehouse, listed offices, the former Stores with the Canteen above, Machine shops and the Blast Furnace Wall with its Cast-house arch (see Fig. 2). 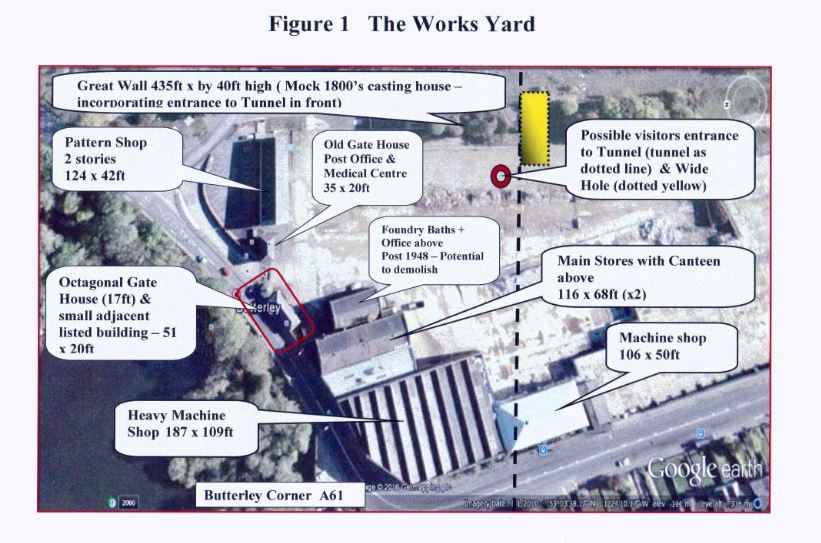 The Trust’s objective is to develop complimentary commercial and public amenities on the site based upon its archaeological and industrial heritage. Such a development would create an important tourist attraction complimenting the nearby Midland Railway Trust at Butterley Station.

The initial action has been to put together some ideas for developing the site’s buildings, the Wall and the section of the Canal Tunnel and Wide Hole lying some 40 – 50 feet below the Works Yard, should the new owners decide to discuss its future with the Trust. The Trust is well aware that such a project may take several years to come to fruition and in addition to being a revenue-generating tourist attraction it also needs to provide commercial facilities such as offices and engineering workshops for other potential users.

The envisaged centre piece of the development (and probably the main revenue generator) would be to provide visitor access to the section of the canal tunnel beneath the Works Yard. It is known that a shaft already exists leading down to an adit located just in front of the section known as the Wide Hole. Here the tunnel was dug double width to enable a boat to moor alongside a wharf formed at the base of two vertical shafts up which raw materials such as limestone could be craned to the raised ground above and behind the Wall from where it would be charged into the blast furnaces. Finished products were also craned down the shafts to be transported by boat out of the tunnel most probably to the East Portal at Golden Valley.

“The aim of this part of the Vision is to give tourists a unique experience whilst learning about the achievements of the Industrial Revolution by making the Tunnel an aspired destination in a similar way to that achieved at Dudley. Safe access to the Tunnel would be via a flight of stairs or lift situated in the Works Yard. The access would be on a grand scale so as to make it attractive and safe showing large illustrations of the canal and of Butterley’s past. Once at water level, visitors will board an electric boat in which they will proceed into the Wide Hole, the only underground harbour of the Industrial Revolution and the only one of its kind anywhere in the world. The Tunnel will be fully illuminated with audio presentations and music, with life size images of men working in the Wide Hole and of ‘leggers’, the men who ,whilst lying on their backs, manually propelled the boats through the Tunnel with their legs (see Fig. 3 – The Wide Hole by Simon Waller). The visitors will also see how the Company’s products were lowered down the shafts into the waiting boat and how coal from the nearby Carr Colliery was not taken to the surface by the traditional way, but loaded onto boats and transported directly down the canal”

An engraving of the Works made in 1800 (see Fig. 4) shows a detailed view of probably the first blast furnace and the pitch roofed cast house located in front of it with Butterley reservoir in the foreground.

The gritstone wall is approximately 450 feet long and 40 feet high (Fig. 5) and marks the eastern boundary between the lower Works Yard and the former Top Plain, now a housing estate. The wall was not built overnight as a single structure but evolved over the first 130 years of the Company’s development. A study of the structures contained within the wall and knowledge of the development of it has emphasised its importance as part of any future visitor experience. The main arch within the wall formed a connection between the front of what is believed to be the first or second blast furnace built in the 1790’s and the cast-house,.  It is envisaged that the cast-house could be reconstructed in front of the wall, possibly including the entrance to the Canal Tunnel experience.

Referring again to Fig.1, the Pattern Shop is a fine two storey stone building built in 1838. During the final decade of the 20th century it was modified to accommodate other engineering facilities and offices. During the final few years of the Company’s existence, the building was entirely used as offices. The building lies on the perimeter of the main site and has its own external car park, making it an excellent choice for a multi-organisation heritage centre.

The Octagonal Gatehouse is central to Butterley’s famous history as it is believed to pre-date the 1817 Pentrich Rising. Both it and the adjacent office block are the listed buildings from which all other buildings on site are listed as being in the curtilage of them. It stands directly at the Works entrance, opposite another similarly old stone building, formerly a house incorporating the old post office in its basement. Both buildings could be restored to their former glory to become the main entrance for visitors and a security facility for commercial businesses on the site.

The oldest part of the Machine Shop is believed to date back to the mid 1800’s when it was known as the ‘engine manufactory’ with the newest part built as an extension in the first decade of the 20th century containing a railway turntable. The buildings also contain two of the last remaining Butterley overhead travelling cranes, which could be easily restored to full working order. The crane tracks are supported on magnificent cast iron columns which in many respects (height and diameter) resemble those in the undercroft of St Pancras Station, built in the same era as the main Machine Shop. Up until the early 20th century, the machines were belt driven and the structure which supported the belt shafts is still attached to the main cast columns. The central area between the ‘old’ and the ‘newer’ parts of the building is a mezzanine floor above which the roof is supported by beautiful cast iron arches. The Cromford Canal passes approximately 40 feet beneath the Machine Shop, the exact location being accurately known. However there is no known access to the canal from within the building although a large shaft of approximately 8 feet diameter exists outside the remaining buildings. However, it does not connect with the canal, but lies approximate 20 feet to the south of it.

The Machine Shop could become an excellent revenue generating venue as a Heritage Engineering facility, for example, for the repair and maintenance of items such as steam boilers for traction engines and locomotives. (One company has already shown some interest). It would be rented out to specialist companies and organisations, whilst at the same time being developed as a further source of revenue by installing internal visitor viewing platforms on the central mezzanine floor to overlook the ongoing operations.

This then is what the Butterley Trust’s ‘Tunnel Vision’ is all about. ‘Pie in the Sky’ or a realistic vision – time will tell. They succeeded at Arkwright’s Cromford Mills, so why can’t we at Butterley!